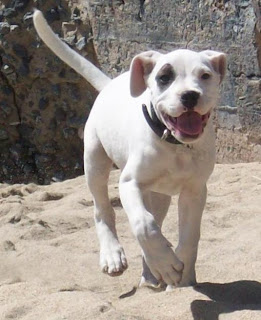 In 1925, two ambitious young brothers in Argentina set out to create a new dog breed.

Antonio Nores Martinez and Agustin Martinez envisioned a dog that was fast with an excellent sense of smell to hunt big game like wild boar and mountain lions. They desired a dog that was fearless and tireless on the hunt, but a friendly family dog at home. More than anything else, the brothers wanted their breed to get along well with other dogs.

Today the Dogo Argentino is rare in the United States.

In 2011,the American Kennel Club (AKC) accepted the breed into its Miscellaneous Class, the final step before full recognition.

The hallmark of the breed is its pure white coat - one dark-colored patch around the eye is allowed - which requires little care. Simply groomed once a week with a rubber curry brush. Dogos are prone to sunburn and must have access to shade during the summer.

Dogos are 23 to 27 inches tall and weight 80-100 pounds. These large, muscular dogs might look intimidating, but Dogos are friendly, affectionate, and devoted to their families, especially children. 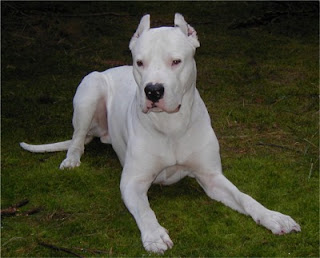 Posted by Joanne Osband at 6:33 PM