I thought the following information might be of interest.
Just in time for the dog days of summer. 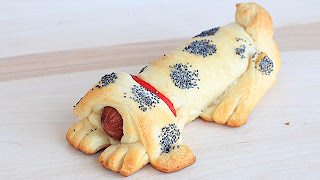 Pillsbury has launched the “Dog Days of Summer: Best in Dough.” Basically, Pillsbury has crafted seven breeds of actual dogs – including bulldogs, basset hounds and poodles – out of Crescent dough and hot dogs. They are looking for input from dog lovers like you to help them decide what other breeds they should feature.

In order for you to submit your pooches’ breed for consideration, simply upload a photo of your dog to Instagram or Twitter with the hashtag #pbdogdays. From there, several will be chosen to be featured on the Pillsbury Facebook page and voted on by the brand’s fans.

If you are interested in making your own dough dogs, Pillsbury has uploaded a step-by-step “how to” guide on its website. Could be a great kid-friendly project for the summer months.

Posted by Joanne Osband at 10:48 AM No comments:

There are some things you can do to be a better dog owner. As a benefit, you most likely will have a happier and healthier dog! 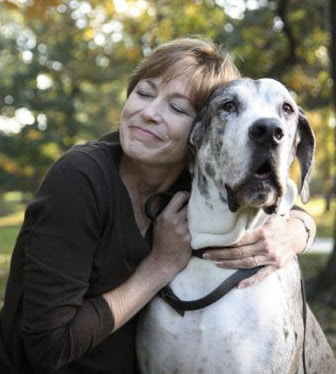 1. Spend more time with your dog – Just spending some quiet time before work, after work or midday, will make a big difference. Dogs love to be talked to and made to feel important.

2. Groom – Most dogs like to be groomed or brushed. - This also stimulates the skin and gets rid of dead hair. Regular grooming will also help keep your house cleaner from less shedding hair.

4. Understand your dog – Know his or her favorite type of play and their favorite time of day to play versus rest.

5. Feed a consistent diet – Use a high quality food with AAFCO approval formulated for your dogs life stage. Supplement with healthy treats only in moderation.

6. Supply plenty of fresh water at all times. Clean the water bowl once daily and make sure it is always full.

8. Carefully choose toys for safety – Not just any toy will do. You really need to consider safety issues when choosing toys for your dog. For example, are there any parts that can be torn off and swallowed? Is it something he or she might "eat" thus causing a possible intestinal foreign body that could require surgery? Will it please your dog? Choose toys that cannot be chewed or swallowed. If you are not sure how your dog will interact with a toy, observe him.

9. Supervise – Always keep a watchful eye on your dog for dangerous or destructive behaviors.

10. Exercise – Daily exercise will keep your dog fit. Additional exercise can help with some behavior problems as well.

12. Be observant – Monitor absolutely everything your dog does. For example, did he eat all his food today? Has he been drinking? Was his urine and bowel movement normal? Is his activity level the same? How does he look? Is his hair coat okay? Early recognition of symptoms can save your dogs life.

13. Visit your veterinarian regularly – Be sure maintain an appropriate schedule of wellness and recheck appointments. Your dog's needs may continue to change depending on their life stage or health conditions.

Posted by Joanne Osband at 8:24 PM No comments:

Summertime! I find myself at the playground often with my two grandsons. Kids love the slides and it looks like some dogs do too. 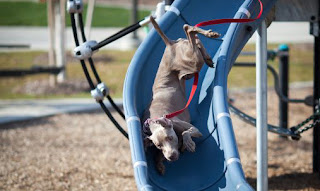 If this guy would turn it around, it would be even more fun!

This Doberman has the right idea:

Posted by Joanne Osband at 2:22 PM No comments:

Are you head-over heels devoted to your dog?

Is your dog your best friend or confidant or possibly your "child"? 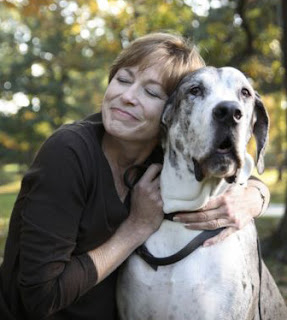 Then, here is a MUST READ:

A Letter To My Dog is a set of love letters from 57 pet owners to their dogs complied by Kimi Culp, Robin Layton, Lisa Erspamer, and publisher Geoff Blackwell. The letters are filled with words such as "hero," "funny," "loyalty," and "unconditional" showing the unwavering love these people have for their dogs.

What would you tell your beloved pet?

Read what others say and be sure to have plenty of tissues.

Posted by Joanne Osband at 2:17 PM No comments:

Is your dog kissing you when he slurps your face like a lollipop?

Although we may never know, there are several possible explanations for this behavior, not all of which are mutually exclusive. The motivation for face licking appears to vary for different dogs and different circumstances. 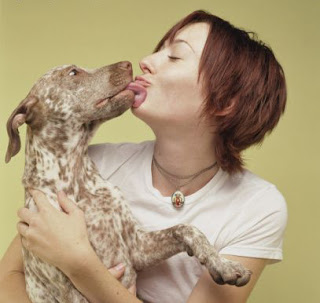 Dogs lick for a number of reasons, some of which are purely biological:

* Mother dogs lick their newborn pups to arouse them from their postpartum daze. In this situation, licking serves to remove clingy membranes from the pup, freeing him up to move and stimulating him to breathe.

* Once the birthing and clean-up processes are over, the mom dog's licking her pups stimulates them to eliminate both urine and feces. It is a couple of weeks before pups will eliminate spontaneously.

* Licking also serves another more romantic role in the sense that it is a comfort behavior that assists with pups' bonding to their mom and spurs on their mental development.

* From about six weeks of age, some pups lick their mom's lips when they want her to regurgitate food for them. They lick; she vomits; they eat it. This behavior is a vestige of their wild ancestry and was designed to ensure that they profited from the spoils of the hunt.

* Licking can also be a signal of submission and so is part of dog's body language communication system.

* Pups and adults lick and groom themselves. It is part of normal survival-oriented behavior. Licking their own lips, limbs, and trunk removes traces of the last meal that would otherwise begin to decompose and smell. Quite apart from the hygienic aspects of this behavior, it also serves to keep dogs relatively odor free and thus olfactorily invisible to their prey. Domestic dogs retain these instincts even though they are not vital today.

Dogs, like people, engage in a number of "displacement behaviors" when nervous or stressed, and many of these behaviors involve self-grooming. Dogs do have their own share of dilemmas. Going to the vet's office, anxious dog patients may begin nervously licking their own lips as they enter the clinic or even lick or nibble their feet or flank.

There is no doubt that some dogs lick as a gesture of appeasement and goodwill. They may lick their own lips or may lick a person to whom they wish to signal deference. Perhaps the behavior is analogous to some forms of human kissing and thus their interpretation may be close to the truth.

However, not all dogs seem penitent when they slurp the faces of people they meet. For some dogs, it seems that they engage in face licking because they can get away with it and because it gets a rise out of the person. When licking is performed for such a reason, it may be component of the "center stage," attention-demanding behavior of dominant dogs.

Some sensitive dogs in stressful environments compulsively groom themselves to the point of self-injury. Licking of this type leads to acral lick dermatitis (a.k.a. lick granuloma). Compulsive licking by dogs is not always self-directed. Some dogs take to licking floors, walls, or furniture. Whatever the outward expression of compulsive licking, the mechanics underlying the disorder are the same. In treatment of this condition, first the underlying anxiety must be addressed though, in some cases, it is also necessary to employ anti-compulsive medication to help break the cycle.

Perhaps some dogs are so awed by their owners that they feel the need to signal their ongoing deference by face licking.

One other thing we should always bear in mind is that any behavior can be enhanced learning. Psychologist BF Skinner immortalized the concept that reward increases the likelihood of a response. So it is with licking. If a dog licks his owner's face – perhaps as a vestige of maternal lip licking, perhaps out of anxiety, or just because his owner's face tastes salty – and his behavior is greeted with attention, hugs and (human) kisses, he will likely repeat the behavior in future.

So while face licking may not represent true romantic love, it nevertheless can sometimes be interpreted as some token of a dog's affection or respect.

Posted by Joanne Osband at 8:30 PM No comments:

Denis Marcellin-Little is an orthopedic surgeon at the College of Veterinary Medicine at Carolina State University. Over the last seven years, he has been pioneering a remarkable intervention for dogs with missing legs, giving them prosthetic limbs that are permanently attached to their bodies. The procedure is called a transdermal osseointegration.

Here is the story of Zeus who lost his paw in a dog attack as a puppy and the miracle work being done in this field by Dr. Marcellin-Little and his colleagues.

Posted by Joanne Osband at 8:18 PM No comments:

Dogs have been domesticated for a long time that they are familiar to us and have such a range of expression. They want what we want; affection and family and useful work to do. This commonality makes a dog a very easy substitute for a human character. You can tell a human story with dogs while still allowing them to act like dogs. At least that is what Graham Chaffee is able to do. 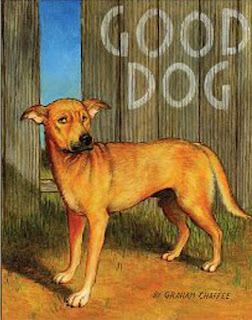 Cover for Good Dog
Graham Chaffee's new graphic novel Good Dog provides the dog's eye view of the world in crisp pen and ink drawings. Ivan, the good dog of the story, is a stray afflicted by nightmares who wanders the streets in search of meaning to his life. Ivan and the dogs he encounters wrestle with life's big themes: independence, assimilation, and loyalty.

Posted by Joanne Osband at 7:53 PM No comments: