Dogs in the Classroom 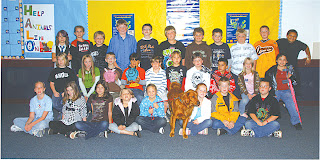 Members of Rylee's Kids at Crestview Heights School in Waldport, Oregon, know how much fun animals can be. That's because one of the members of their class is furry and four-legged!

The kids' teacher, Mr. Bodle, feels that having a classroom canine companion is good for his students. "When Rylee is around kids, he's so polite. Everyone loves him," says Mr. Bodle. "And, after spending time with Rylee, the kids have a more caring attitude."

We'd have to agree. Getting to know Rylee has definitely made the kids want to help other animals!

One Penny At a Time

For the past five years, Rylee's Kids have held multiple fundraisers—including a penny collection to help animals left homeless by Hurricane Katrina.

Recently, they focused their efforts on helping an organization called Helping Animals Live On (HALO). To collect donations from the community, the students created papier-mache piggy banks. After painting and decorating the banks, the kids placed them in area stores and businesses.

"Businesses love having the piggy banks," says Mr. Bodle. And their customers must love them too because the fundraiser was a big success! The kids raised $538 to help pay for food and veterinary care for rescued animals.