I am wondering if dogs "show off" to their dog friends?

My Irish Setter and Golden Retriever use to prance when they had something in their mouth, but I am questioning more of a "watch me" attitude.

Ebony had her good friend Ginger, Golden Retriever, over recently for a five day slumber party. It was definitely a party! Two dogs for one person are a handful, but they are both well trained. In fact, I only needed to put one dog on the training collar when we went for walks because the other dog would hear the tone and obey the command too. I like the way my son trained Ginger to come and sit by your side when she hears the "come" command. This really impressed my neighbor who is in dog training school with his Golden Retriever.

Ebony stalks the squirrels at the end of the road. It is a game they play because I have seen the squirrels bait her. Ginger began to catch on to the game. One day Ebony, like lightning with Ginger on her tail, raced into the neighbor's yard and captured a squirrel. She showed Ginger. That is when I made her drop the squirrel and let it go. I believe Ebony scored major points in Ginger's eyes. Do you think Ebony was "showing off" to Ginger? 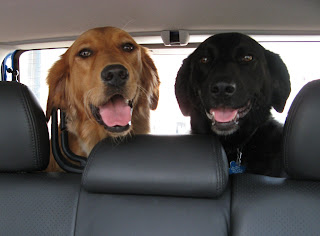 We are ready to GO!
Posted by Joanne Osband at 6:02 PM