Military dogs have served on the front lines, sniffing out explosives, tracking down enemy fighters, and parachuting out of helicopters. They have become invaluable on military missions. 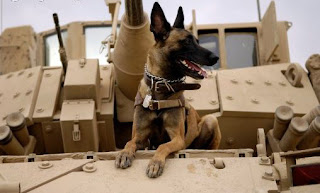 Now, like the soldiers they assist, military dogs are developing post-traumatic stress disorder. According to a December story published in the New Your Times, about 5 percent of the 650 canines deployed by American troops suffer from canine PTSD. Of those, about half will likely not recover enough to return to service, says Walter Burghardt Jr., D.V.M., chief of behavioral medicine for the Holland Military Working Dog Hospital at Lackland Air Force Base in San Antonio.

Symptoms of canine PTSD include dramatic temperament changes such as sudden aggression toward the handler, increased timidity or neediness, or an unwillingness to work.

Since dogs cannot articulate the cause of their distress, canine PTSD can be difficult to treat especially since it is a relatively new concept among military veterinarians. Sometimes a break from duty is enough to get a dog to snap back. Other times the dog needs desensitization to the stimulus that causes a reaction...similar to treatment for humans. Veterinarians sometimes prescribe anti-anxiety drugs such as Xanax as well. 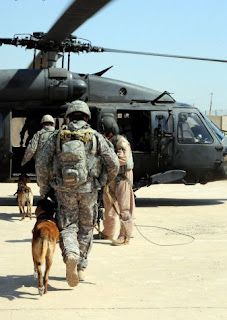 Posted by Joanne Osband at 2:30 PM