This is the second in the series of the top TEN mistakes dog owners make. Previously, I posted the first three mistakes and following this one will be the last four mistakes.

Mistake 4: Dispensing Too Many Free Treats

Why this is a mistake? Treats lose their training value if your pet gets them for no reason.

How to avoid it: “Think of treats as currency given to a pet to reward good behavior,” says Marty Becker, a veterinarian and a coeditor of Petconnection.com. Assign each type of treat a value, and pay according to how well your pet behaves. Kibble is worth a dollar; a chicken strip, five; bologna, 10. “But it’s important to not pay off the good behavior all the time,” Becker says. “That way, your dog will always hope he might get that piece of bologna, and he’ll eventually perform without seeing a treat.”

Mistake 5: Neglecting to Socialize Your Pet

Why this is a mistake? Pets that are not exposed to a variety of animals and people at a very young age can develop fears and aggressive behavior.

How to avoid it: Introduce your pet to adults, kids, animals, and environments so he will take every novelty in stride. It is optimal for a pet to start the process before you bring him home, since the critical socialization period is early in life. “For a dog, it’s between the ages of 3 and 12 weeks, says Nicholas Dodman, director of the Animal Behavior Clinic at the Tufts Cummings School of Veterinary Medicine, in North Grafton, Massachusetts. The breeder or the shelter’s adoption counselor can tell you how much socialization an animal has had. 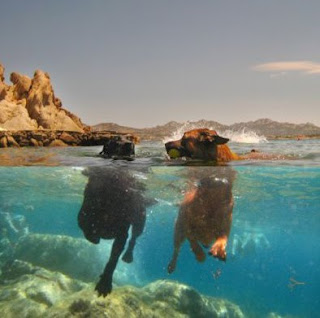 Why this is a mistake? Pets have pent-up energy that needs to be unleashed through physical activity. Otherwise it will be channeled into barking, jumping, or even hostile behavior.

How to avoid it: “Walk your dog at least twice a day for a minimum of 30 minutes each time,” says Cesar Millan, host of The Dog Whisperer, on the National Geographic Channel. “To your dog, that’s a primal activity ― birds fly, fish swim, and dogs walk.” Pamela Reid, vice president of the ASPCA’s Animal-Behavior Center in Urbana, Illinois, recommends that dogs get at least 40 minutes of aerobic exercise daily. “Dogs need more exercise than people do,” says Reid. Try running or biking with your dog or playing fetch or Frisbee.
Posted by Joanne Osband at 6:15 PM