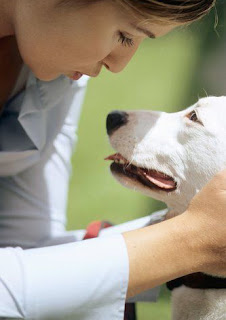 What do you do about a dog that barks too much?

The first step in quieting your pooch is to understand why he is raising such a ruckus in the first place. Dogs, after all, bark for all kinds of reasons. They bark when they're anxious or when they are lonely. They bark to draw attention to themselves or to warn someone encroaching on the property. Sometimes, they bark just because it feels good.

If the dog barks only when you are home, he is probably barking for one of two reasons: Either he wants attention or he is trying to warn you about something. Most dog owners feel safer knowing that their dog will alert them to intruders, so they usually reward alarm barkers. Because you are likely to want your dog to continue his warnings, you do not want to discourage barking entirely, but the trick is to teach him to stop barking when you tell him to.

When trying to curtail a dog's barking, as with any other training program, be consistent and clear about just what you want your dog to do. If you tell him to be quiet, you must then enforce what you have instructed. It does not work to yell "quiet" from three rooms away and then continue to talk on the telephone as your dog rants and raves at the window.

Instead, consider keeping your dog on an indoor lead and having him by your side at potentially problematic times. When you see he is about to bark, pick up on the lead and tell him to sit. Better yet, pair the lead with a head halter – which gently pulls the dog's head up, closing his mouth. When he stops barking, release the tension on the lead and praise him. An extra reward will emphasize your appreciation.

If your dog constantly demands your undivided attention, consider ignoring his demands - consistently - for a week. Try standing up and walking away whenever he starts to bark. This form of training, resulting in gradual "extinction" of barking, is very effective because it removes all rewards that, until now, were reinforcing the behavior. Keeping in mind that even scolding or brief eye contact can be interpreted by your dog as a reward, try to show no response at all. You can take this training a step further by giving your dog attention, such as petting, only when he is quiet. With patience, you can change many kinds of learned behavior through the process of extinction.

Sometimes, you can cut down on barking by using an anti-bark collar. These collars are most useful for dogs that bark when their owners are away and cannot correct them with voice commands. However, do not use one with a dog that shows signs of anxiety; it will only make the problem worse. When left on their own, for example, some dogs become extremely stressed, and act out that behavior by barking non-stop. In that case, the dog should be treated for the underlying cause of the problem – separation anxiety – not just his barking.

Anti-bark collars utilize ultrasound, electric shock, and vibrating devices – they work by punishing the dog when he barks. Electric shock may be effective, but is viewed by many as inhumane: Other types of collars that do not rely on inflicting pain contain citronella oil, its spray triggered by barking, has become available and can be an effective tool for distracting the dog from barking.

Luckily, most dogs will respond to some intervention to curtail their barking. Whether you simply bring an outdoor dog inside (which should calm the neighbors) or take the time to apply behavior-modification techniques, you can cause a dog to be less of a nuisance and to be more socially acceptable.
Posted by Joanne Osband at 7:30 PM