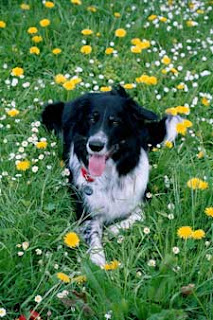 Researchers have been working with a Border Collie dog who possesses a vocabulary of over 200 words and seems to show the ability to pick up or work out the meaning of new words on first hearing. The findings are expected to open up a new international debate on the nature of languages.

Rico is a 9 year old Border Collie from Dortmund, Germany. His owners started to teach him the names of toys and various everyday items at the age of 10 months in order to keep him stimulated while he was ill and unable to go out and exercise. Games were developed based on retrieving toys from a box or locations in other rooms. Most of the words he understands are the names of toys.

According to his owners, Rico rapidly developed an expanding vocabulary which now exceeded 200 words, and has demonstrated that he can learn the names of new toys easily - and remember their names many weeks later, even if he had not seen them in the intervening period. Impressed by the dog's apparent understanding of language, scientists have taken him in for tests.

They found that Rico has a learning ability thought to be unique to children. Children learn perhaps 10 words a day with just one exposure. This ability to realise that new words tend to refer to unfamiliar objects is called "fast mapping" and is used by children as they develop the breadth of vocabularies they will need to understand human language. Shown a toy once, Rico learns its name and can, on command, retrieve it from a distant room a month later with a reliability "comparable to the performance of 3-year-old toddlers" said Professor Fischer.

This shows that Rico has a vocabulary size about the same as apes, dolphins and parrots trained to understand words, the researchers say. Such quickness to learn a word eludes chimpanzees, thought to be man's closest relative. Rico has also learned his commands in German and English.

Border collies are among the brightest breeds. Bred to work on farms, they have a particularly good grasp of spoken words. But the scientists believe they have shown something more than the intelligence of the breed, saying that seemingly complex language skills only seen before in children appear to be found in other species.