A Dog for A Christmas Gift? 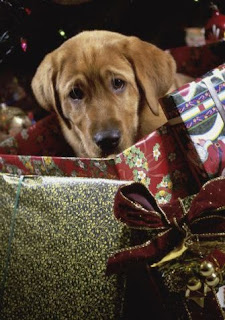 The bond between humans and dogs is a beautiful thing, and watching it develop can be almost as satisfying as forging it yourself. So it’s not surprising that dogs are such a popular gift idea.

The person who gives a dog as a gift gets a front row seat to watch those first wonderful moments. But think about the scene in which you present your loved one with their furry gift, and look at it from the other side: the excitement of the holidays can produce a frenzied, almost manic atmosphere, and excited energy like that can be an unhealthy way to begin a new canine relationship.

As Cesar Millan, Dog Whisperer, says dogs need structure and leadership, and shrill cries and cheers from a new pack leader in training don’t fit the bill. He believes that those first key moments should be met with a calm, assertive energy so that puppy can get acclimated to the new family hierarchy – affection should be saved until the dog’s fresh energy has been burned off and he is ready for sleep. Cesar feels that sometimes it is even a good idea to hold that affection until several days into your new relationship; as much as a week is recommended.

Another speed bump along the road to a responsible pet ownership is making sure that you choose a dog that fits with the energy of the person who will be receiving it and with the rest of the family as well. Following through on this may mean involving the gift recipient in the selection process. For this kind of gift, a carefully wrapped IOU can be given in place of the animal itself, to let the person know that their gift is coming (many shelters offer packaged gift certificates for exactly that purpose!) Their face may not be covered with puppy kisses after the big reveal, but you can be sure there will be a broad smile in it for you!

Remember: dogs can make wonderful gifts, but unlike sweaters or socks, they aren’t as easily returnable if the fit isn’t just right. The new owner must be ready to make a commitment for the animal's entire lifetime and be prepared to accept the responsibilities that come with their new family member. The relationship between human and dog must be approached with care and respect – only then will you have a gift truly worth giving!
Posted by Joanne Osband at 3:42 PM