Dogs Can Get Sunburn 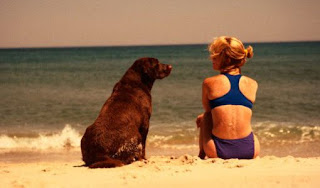 Immediately after the burn, the skin may look like leather or the surface of the burn may appear white.

Sunburn usually occurs in the summer months when at-risk animals (such as white dogs and hairless breeds) spend too much time in the sun.

Superficial partial thickness burns are similar to first-degree burns. Only the top layer of skin is involved. The hair (if present) may still be attached to the skin. The skin appears red and no blisters are seen.

Deep partial thickness burns are similar to second-degree burns. The surface layer and some deeper layers of skin are involved. Unlike in humans, these burns usually do not have blisters. The skin is red and some layers of the skin may be exposed.

Full thickness burns are similar to third-degree burns. The burn extends through all layers of skin and may even include tissue beneath the skin.

Treatment of sunburn is based on the severity of the burn.

For these burns, the hair is carefully shaved from the burned area in order to ease treatment and better monitor healing.
The wound is gently cleaned with povidone iodine or chlorhexidine.
Topical creams such as silver sulfadiazine are quite effective in burns.
Most superficial partial thickness burns can be treated on an outpatient basis with the remainder of treatment and care done by the owner.

For these burns, hospitalization is necessary.
Intravenous fluids are necessary to provide hydration and needed electrolytes.
Daily wound cleaning with povidone iodine or chlorhexidine.
Daily bandage changes.
Topical cream such as silver sulfadiazine.
If over 15 percent of the body is burned, skin grafts may eventually be required.

If you suspect your pet has a sunburn, veterinary care is recommended. Dogs do not burn as easily as people, so more damage has occurred to the skin than you may be able to initially see. After diagnosis and initial treatment, daily treatment with wound cleaning and topical medication may be necessary.

For dogs at risk, apply sunscreen before spending time outdoors. As in humans, it is suspected that repeated sunburns may result in permanent skin damage and even possible skin cancer. 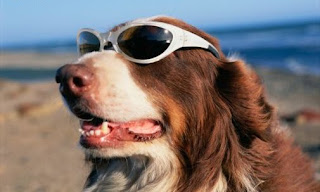 Posted by Joanne Osband at 8:47 PM