I believe dogs have best friends.

Ginger and Brinkley, Golden Retrievers, met at Marymoor Dog Park in Seattle, Washington when they were six and seven months old. Jayme and Brian had a hard time separating them when it was time to go home. They decided to have doggie play dates.

As the story goes, the doggie play dates then turned into Jayme and Brian dates. It is a fact, proven here, that dogs are attractors for partners of the opposite sex.

Now Ginger and Brinkley get to play together when ever they want! 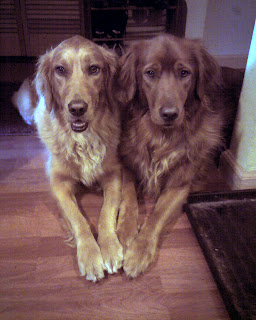