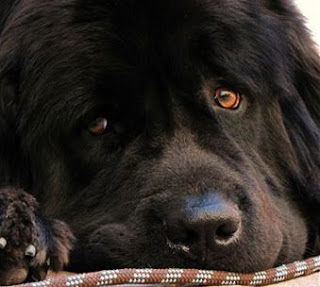 Unwanted behavioral signs of separation anxiety are only seen when the owner is absent, or when the dog is prevented from being close to the owner (at night, for instance). Under such circumstances, a needy dog is in a high state of anxiety because she wants to be with her owner and is prevented from doing so. Dogs, like people, cannot stay in a high state of anxiety for long, and must do something to relieve the tension.

To reduce the tension, dogs may engage in destructive behavior, house soiling, and distress vocalization. Other signs may include a reduced activity level, depression, loss of appetite, ritualized pacing, aggression when the owner leaves (mouthing, growling, nipping, or body blocking), excessive grooming, diarrhea, vomiting, panting and salivation. Signs of over-attachment when the owner is home include excessive following behavior, anxious behaviors associated with signals that the owner is preparing to depart, and exuberant greetings.

Excessive chewing, digging and scratching tends to occur in areas near doors and windows ("barrier frustration"). Damage in such areas is virtually diagnostic of separation anxiety. These areas represent exit routes for the dog as it attempts to reunite herself with the owner or, at least, to escape the loneliness. If the dog is confined to a crate, or its movements are restricted by a gate, destruction is usually centered around the crate door or the gate itself. The dog may seriously injure itself during these escape attempts. Attempts to free itself from barriers may result in broken nails or teeth, a bloody mouth, or more extensive injuries from tearing through glass and wood. Dogs may also destroy property that carries the owner's scent, such as bedding, furniture, clothing, or shoes.

Barking, howling and whining are other common signs of separation anxiety. Distress vocalization and active seeking behavior occur when many social animals are separated from their companions. Such distress vocalizations represent the dog's attempt to reunite the social unit. Excessive vocalization may occur primarily at the time of the owner's departure or may continue throughout the duration of the owner's absence. Owners are often unaware that their dog is distressed by the departure and it is only when neighbors complain about the excessive barking or howling that they become aware that their dog has a separation problem.

Dogs with separation anxiety may become so distressed in their owners' absence that they urinate or defecate in the house. When this occurs only in the owner's absence, such "inappropriate" elimination is not indicative of a loss of house training but rather is a physiological response to the extreme distress the dog is experiencing from being alone. House soiling typically occurs within 30 minutes of the owner's departure as the dog becomes more anxious.

The next blog will focus on treatment and behavior modification for separation anxiety in dogs.
Posted by Joanne Osband at 2:16 PM